The long anticipated Legend of the 7 Golden Vampires Scrapbook 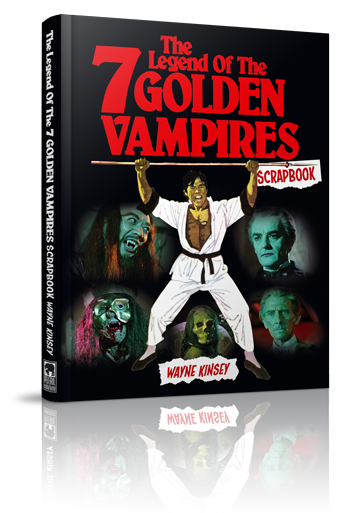 Hammer Horror! Dragon Thrills!
With the first two volumes of our Hammer Scrapbook series sold out (Dracula and Frankenstein), we now present the third in our limited edition series concentrating on Hammer’s cult 1973 co-production with Hong Kong’s Shaw Brothers Studio, The Legend of the 7 Golden Vampires.

In our popular scrapbook tradition, we bring the film to life with photos, documents and assorted ephemera. We trace its origins, pre-production, shooting, post-production and marketing and present Peter Cushing’s and director Roy Ward Baker’s annotated scripts along with Baker’s handwritten notes. Possibly the only surviving intact Hammer Cushing script, it is densely annotated throughout showing his legendary perfectionism and approach to his last appearance as vampire hunter, Prof. Van Helsing. It comes complete with his gorgeous water colour paintings of his costume suggestions.

The book also contains a Hammer Dracula retrospective, a look at kung fu in the media, a history of Shaw Brothers Studio and looks at Hammer’s other aborted Dracula projects, including Victim of his Imagination, the Dracula in India projects, Vlad and Vampirella.

Plus a look at Hammer’s other co-production with Shaw, Shatter, which was shot back-to-back with 7 Golden Vampires. 344 sumptuous colour pages in the Peveril book tradition!

Limited edition – 600 signed and numbered copies only available from this website.

This is now SOLD OUT!